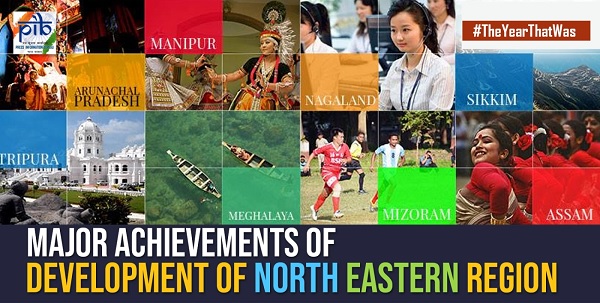 North-Eastern Bharat, the land of diversity, complexity, natural splendor and unique culture, is the one of the most intriguing part of the world. Home to numerous ethnic groups and variety of natural habitat, the land of tribes is grossly underdeveloped region of the nation.

North-East has, for ample amount of time, been ignored and sidelined in the nation’s run towards development. The region has been the remotest for the governmental initiatives and schemes to reach. The vast geographical challenges coupled with lackadaisical approach of the authorities and uncooperative attitude of the people, has led to serious under-representation of the North-Eastern region in the majestic festival of development.

North-Eastern Bharat comprises of eight sister states of Arunachal Pradesh, Assam, Manipur, Mizoram, Meghalaya, Nagaland, Sikkim and Tripura. Each state has presented unique and uncommon challenges for the central government in driving the region on the wheels of progress.

Blessed by the nature, the region possess rich and abundant natural resources critical for the development. Under-utilization of the resources on the table and despicable connectivity throughout the region were the primary reasons behind north-east missing the bus of growth which the other accessible states were riding.

To carry sustainable development operations and initiatives in the north-east, robust connectivity infrastructure is the key. Improved connectivity in the region can enhance and boost active cooperation within the states and can increase en masse movement and financial activity. Increased investment, enhanced utilization of natural resources, surge in tourism and better monetary flow are some of the benefits of better connectivity apart from better transportation in the region.

The change in the name of previous government’s ‘Look East’ policy to ‘Act East’ by this government carries huge symbolic statement and describes attitude of both the governments towards the region. This government under the leadership of Prime Minister Narendra Modi understood the need for enhanced connectivity both within the region and with the region.

Here we will look into initiatives taken by this government for furthering integration and development of the North-East region of Bharat.

The Ministry of Railways in this government has been consistent in its approach towards enhancing rail connectivity throughout the region. The government batted far more conscientiously and sustainably than any other in the previous years. Roughly looking, Modi led NDA has implemented and provided more in the region than all precursory governments combined.

The Railways, under current government, has a 517 Km roadmap to bring the north-eastern region close to the heartland by 2020 through improving infrastructure and enhancing connectivity. Connecting the region to the heartland was something which should have happened till now but due to difficult terrains, loose soil, inclement weather conditions and law-and-order situation, development process was halted in the region.

“We have set a target of 2020 to connect these state capitals to the main railway network. Once these are complete, new trains which would directly link these to the metros will be introduced. This will not only help regional connectivity within these states, but also bring the Northeast closer to the rest of Bharat,” ET quoted A K Yadav, Chief Administrative Officer (Construction), NFR.

“There are plans to provide a railway link for the NE states through 20 major railway projects, encompassing 13 new lines, two gauge conversions and five doublings with a length of nearly 2,624 kilometers.” informs a prop tiger column.

Tripura, will get mainstream direct connection via Agartala – Belonia – Sabroom rail line. It is a 112 Km broad gauge line connecting Tripura’s capital city Agartala with Assam’s Sabroom. Rs. 3,451 crore is credited for the project. When completed, Bangladesh’s Chittagong port will be just 90 Km away and will enhance trade decreasing price of most of the products while giving a boost to the export.

Mizoram, will get connected with the main rail lines through 52 Km Sairang – Bhairabi rail line. Crossing through 23 tunnels spanning 9 Km of route, 36 major and 147 minor bridges, the project is unique in its own way. The route include three stations viz Hartoki, Kawnpui and Mualkhang equipped with contemporary facilities like escalators and foot over bridge etc. The project can prove to be the best infrastructural initiative in the state till date.

The largely isolated state of Manipur will get linkage with rest of the region and country through Jiribhum – Imphal railway line. The 111 km line passes through Makru and Tupul. Running through 37 tunnels and 22 bridges, the project is extremely vital for the people of Manipur. As Manipur’s economy largely depends on agriculture, forestry, trade and cottage industries, improving connectivity will help the state take big leaps in economic growth.

The capital city of remote state of Meghalaya will get connection through 108 km Barnihat – Shillong line. Meghalaya is a mountainous state of great scenic beauty and good economic resources. Home to Khasi, Garo and Jaintia hills, the rainiest area of the world, was not easy to get connected. The government has braved the progress work with new track laying, gauge conversions and new lines surveying.

Lying in the high Himalayas the small state of Sikkim and its capital Gangtok lacked connectivity with the mainland country. Now this government has carried out infrastructural works for connection of rest of the country with Sikkim’s Rango which in turn is connected to Gangtok 40 km away.

Perhaps Bharat’s least known and remotest state of Nagaland will receive connectivity with rest of the part through Dhansiri – Sukhobi – Zubza line. The 91 km line will connect Nagaland’s capital city Kohima and Assam’s Dimapur. Constructing the line requires adventurous functioning of all government bodies as it passes through 90 bridges and total 26 km of route comes inside the tunnel.

Huge gauge conversion projects were carried out by Northeast Frontier Railways post 2014. Ever since the independence, every government failed in improving the railways infrastructure in the region. When gauge conversions throughout the countries were being carried out, northeast was rather ignored. This government, however, stood one step higher than all preceding ones regarding gauge conversions and doubling of tracks.

Some of the major gauge conversion projects are Rangiya to Murkongsalek, a 505 km project in Assam to convert the entire route to broad gauge. Lumding to Dibrugarh project, which has branch lines included gets 732 km long. Other major mentionable projects are Kumarghat (Mizoram) – Ditokcherra (Assam), Bhairabhi – Jiribhum and Migrendisa – Lumding.

Doubling of lines was one of the priorities of government in order to improve the infrastructure. Scores of routes were doubled, mentionable being the New Jalpaiguri to New Alipurdua route, New Bongaigaon – Guwahati – Lumding route, New Coochbebar – Samuktala route, New Coochbebar – Gumanihat Patch route. Doubling will increase transportation speed and will give a boost to both tourism and trade.

Northeastern region of the country is least developed when it comes to infrastructure. Road density of the region per unit km is lowest in the country and below national average. Total length of national highways in the eight states of north-eastern region is 8,480 km at present. Arunachal Pradesh, despite being the largest state in the region, has least road density and its northern part is grossly underdeveloped.

This government, ever since taking the charge, has exceedingly focused on roadways development in the north-eastern region. The Centre has sanctioned Rs 1,90,000 crore for road projects spanning over 14,000 km in the northeast.

A total of Rs 1,66,026 crore has been sanctioned for construction of over 10,000 km of roads in eight states under National Highways & Infrastructure Development Corporation Limited. Additionally, Rs 7,000 crore has been approved for 850-km stretch under NHAI, he said. “The Ministry of Road Transport and Highways has also sanctioned Rs 17,257 crore for respective Public Works Department for the construction of 2,421 km of roads in the states,” FE quoted Union Minister Nitin Gadkari explaining in September 2018.

Completion of the state-of-the-art Dhola-Sadiya Bridge at a total cost of Rs 2,056 crore, as part of the Arunachal Package of Roads and Highways, is a magnificent work of the government in its own way. The three-lane 9.15 kilometer bridge is said to be capable of withstanding the burden of 60-tonne battle tanks.

North-eastern Bharat is strategically immensely significant region with states bordering China and acting as gateway to South-east Asia. The region, though, has not witnessed the strategic development and infrastructure up gradations it should have considering its geo-political position. Moreover, the region can become hub for trade, tourism and economic development for the entire Bharatiya North-eastern and Asian South-eastern region, if developed prudently and strategically.

The government under PM Modi has done stellar works in that direction. It espouses a two phase plan to develop airways in the region i.e. first phase from 2016/17 to 2018/19 and second phase from 2018/19 onwards.

Construction of Itanagar Holangi airport, works on Tezu airport in Arunachal Pradesh and runway extension of Shillong (Umroi) airport to make it compatible for larger aircrafts, up gradation of Guwahati airport into international airport and up gradation of Kailashahar airport under UDAN scheme was also completed in phase 1 of the program.

Union Civil Aviation minister Jayant Sinha announced in first ever North-East Development Summit in 2017 about few initiatives by civil aviation department, among them works were carried out on 19 new airports and underserved airports which include Rupsi airport in Assam, Meghalaya and Tura were added to the aviation network of the country. Imphal got a direct flight service to Delhi from January, 2018. 17 new heliports were opened in the region.

The most remarkable airways infrastructural boost to north-eastern region was the Pakyong Airport in Sikkim, inaugurated by Prime Minister Narendra Modi on September 24, 2018. Situated around 30 kilometers from Gangtok, the airport is built over an area of over 200 acres, atop a hill at 4,500 feet above sea level making it one of the five highest airports in the country. Developed at a cost of about Rs. 605 crore, the airport has a 1.75-km runway.

The government has done magnificent and stellar works in its first phase of development in the north-east region of the country. Strategically, socially, economically and culturally important region of North-East Bharat has witnessed the pertinacious, growth tenacious, undaunted and adamant developmental initiatives of Narendra Modi led NDA government post 2014. This government will stand higher on parameters of development then any precursory one.