The Inspiring Story of Sheetal Suryawanshi -a doer who dreamt 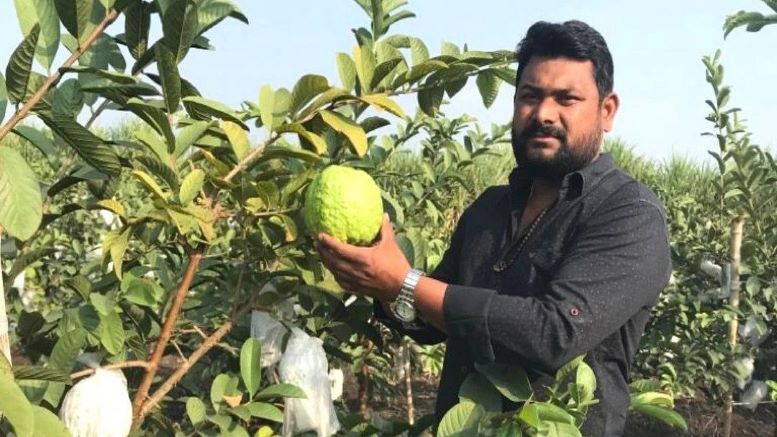 Most would rather sit in comfort and wait for opportunities than take risks. But, this is what distinguishes the doers from the dreamers. This is the story of 34-year-old Sheetal Suryawanshi, a business management graduate, who believes that success is round the corner if you are willing to take calculated risks and he has gone all out in order to achieve it.

Sheetal resigned from his corporate job despite disagreements with his family. He decided to grow Guavas organically, in the traditional ‘sugar belt’ of Sangli in Western Maharashtra. He got the fruits of his labor and his earnings doubled.

“After graduating in 2009-10 from a private college in Satara, I took a normal job in a multinational company until 2015. But I wanted to experiment with the farming methods as a change from growing sugarcane was necessary,” said Sheetal.

There is a common belief that sugarcane cultivation is very profitable. But the actual scenario is just the opposite. Sheetal realized this fact and said, “The sugarcane crop requires a lot of water for a good yield. The harvest comes in 17-18 months which is a long time. The farm produce gets sold in the factory and earnings reach the bank account 3 or 4 months later.”

Sheetal’s calculations after considering the expenses showed that the profits come down to Rs 70,000 – 75,000 per year. “Farmers here have 10 to 15 acres of land and surplus produce, earning them Rs 9-10 Lakh annually. This seems to have given them a laid back attitude and stopped them from trying better methods,” he adds.

After giving up his alluring corporate job in 2015, he started considering an alternate crop. “Initially, I thought of grapes, but then a friend from Ahmednagar suggested guava, as it was quite in demand in Shirdi and surrounding areas. The soil and weather conditions in Sangli also favored the crop,” he added.

Sheetal convinced his father to experiment on their two-acre plot of land and left the remaining eight acres for sugarcane cultivation. He decided to grow guavas organically. “I planted two different varieties of guava on an acre each. I also tried organic farming methods to reduce the toxic chemicals sprayed on the fruit,” he said.

“With all the investment and expenses gone, I still earned a profit of Rs 1.5 lakh in 14 months and that too from just two acres,” he says with contentment. The farmer earned Rs 3 Lakh by selling his 10-ton yield in the first harvest season.

Hard work always pays. “The fruit harvests throughout the season and I earn about Rs 10,000 a day with minor harvests and sales. I am financially much stable, and many others have adopted the technique in the area,” he added. Sheetal distributed saplings to local farmers for almost 25 acres of land.

A farmer named Vikas Chavan from Sangli said, “I was skeptical about changing the crop pattern. I tried growing grapes and failed to succeed as expected. I was surprised that it requires fewer interventions and organic mixes for preventing pests,” he said after growing guava in his 1.5 acres of land successfully.

Another farmer Abhijit Jagdale, after harvesting guava for the second season said, “It has been 18 months since I took up high-density plantation of 2,000 trees in one acre. I plan to increase the cultivation of guava if the success continues.”

Sheetal also took immense risks as he knew that success won’t fall in his lap. He had to chase and hunt for it. “My family is happy, and my father is convinced about taking these risks for good. The bonus is I can guide others around me to change the traditional farming methods and enable them to prosper,” he proudly says.