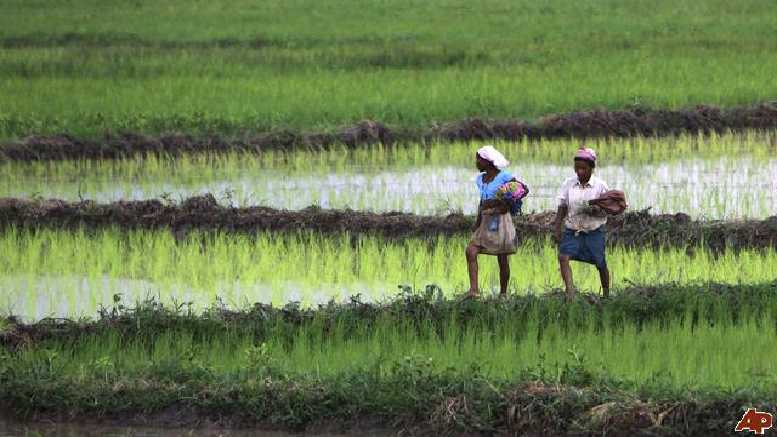 Bharat has set an ambitious target of doubling the farmers’ income and also simultaneously have a target of US$ 60 Billion agri-export by the year 2022. The value of processed food exports during 2018-19 was of the order of US$ 35.30 Billion accounting for about 10.69 percent of Bharat’s total exports.

Bharat’s Position in World Production of Agricultural & Food Products are:

Various policy initiatives taken by the Government of Bharat

According to the Department for Promotion of Industry and Internal Trade (DPIIT), the Indian food processing industry has cumulatively attracted Foreign Direct Investment (FDI) equity inflow of about US$ 9.98 billion between April 2000 and March 2020.

Government of India recently launched Agri Infrastructure Fund for Rs. 1 lakh crores (1st year Rs.10,000 Crores and next three years Rs. 30,000 Crores each) and the scheme is operational for 10 years. All assets created under this scheme will be geo-tagged for effective real-time monitoring according to the press reports. This scheme is expected to strengthen the rural infrastructure and improve the market linkages in order to reduce the storage and distribution losses and enhance the overall yields.

Bharat is among the 15 leading exporters of agricultural products in the world. Agricultural export from Bharat reached US$ 38.54 billion in FY19 and US$ 28.93 billion in FY20 (till January 2020).

Bharat has the largest livestock population of around 535.78 million, which translates to around 31 per cent of the world population. Milk production in the country is expected to increase to 208 MT in FY21 from 198 MT in FY20, registering a growth of 10 per cent y-o-y. Agriculture is the primary source of livelihood for about 58 per cent of Bharat’s population.

Gross Value Added (GVA) by agriculture, forestry and fishing was estimated at Rs 19.48 lakh crore (US$ 276.37 billion) in FY20 (PE). Growth in GVA in agriculture and allied sectors stood at 4 per cent in FY20.

Bharat’s food and grocery market is the world’s sixth largest, with retail contributing 70 per cent of the sales. Bharat’s food processing industry accounts for 32 per cent of the country’s total food market, one of the largest industries in Bharat and is ranked fifth in terms of production, consumption, export and expected growth.

Government is targeting to double the farmers’ incomes by 2022-23 (2015-16 as the base year). Whereas the ground reality is not showing encouraging signs.  A 2012-13 study by the National Sample Survey Organization (NSSO), estimated the average monthly income of farm household at Rs 6,426, whereas

The NABARD All India Rural Financial Inclusion Survey (NAFIS) shows that average agriculture household income was Rs 8,931 per month in 2016-17. Agricultural households in Bihar, Jharkhand, West Bengal, Uttarakhand, Odisha, and Uttar Pradesh have a very low monthly average incomes. Agriculture has a share of 16.5% in GDP and close to 50% of the country’s population is dependent on it.

NABARD survey also indicates the income inequality of the farmers across the states in the country as under.

According to a report by Central Institute of Post-Harvest Engineering & Technology (CIPHET), Ludhiana submitted in March 2015 the annual value of harvest and post-harvest losses of major agricultural produces estimated at national level was at Rs. 92,651 crore calculated using production data of 2012-13 at 2014 wholesale prices.

Reverse migration of workers from Cities to Villages

Post Covid lockdown, several lakhs of migrant workers have come back to the villages and most of them are either under employed or unemployed.

Need for a Strategic Approach

As the agriculture sector is showing signs of growth with prediction of favourable monsoons, there is a need for a strategic approach to give more thrust to this sector.

A special task force from various ministries like- Ministry of Agriculture & Farmers’ Welfare, Ministry of Food Processing Industries, Textile Ministry, Ministry of Environment, Forest and Climate Change, Ministry of Rural Development, Ministry of Micro, Small and Medium Enterprises and the six commodity boards (Coffee Board, Tea Board, Cardamon Board, Rubber Board, Coir Board, Central Silk Board) to be formed in order to put on fast track the various government initiatives in agriculture , allied activities and agro-based industries.

Niti Aayog may be entrusted with the task of coordinating with the states in this mission. While the farmers can be productively engaged in agriculture and allied activities, the migrant workers who have come back to the villages post Covid lockdown can be productively absorbed in rural infrastructure development works and agro-based industries.

This would not only improve the production and exports in agriculture but more importantly reduce the rural poverty, income inequalities significantly and discourage migration of people from villages to cities.

Though the share of agriculture in GDP is not expected to increase substantially even a marginal increase of its share in GDP by 1% will lead to increasing the rural household incomes significantly resulting in boosting the consumer demand in the economy provided the above initiatives of the government are targeted in ensuring direct market access to the farmers by eliminating the middlemen.

Let us hope the government will take the required steps in this direction.