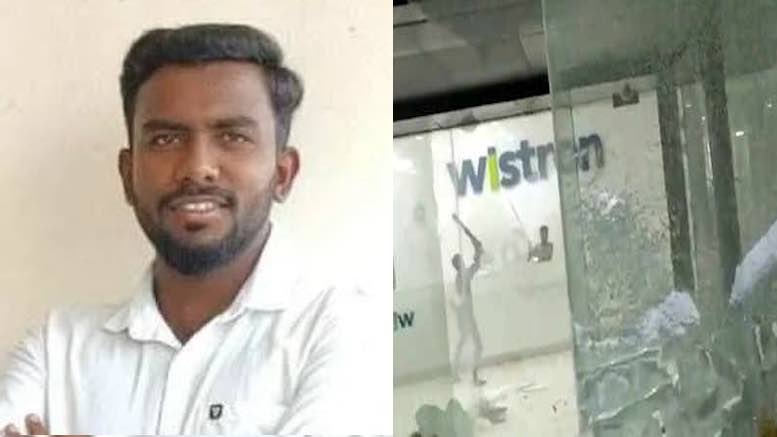 An SFI leader has been arrested in connection with the recent vandalism and violence which rocked an Apple iPhone production unit run by Taiwanese company Wistron in Kolar district, Karnataka.

Comrade Srikanth, taluk president of SFI in Kolar, was picked up in connection with the violence that broke out at the Wistron factory in Narasapura early Saturday morning, around 65 km from Bengaluru. As per reports, Srikanth brought outsiders into the factory premises and instigated violence.

As per News18, Wistron’s workforce at this plant “has gone up from 1,500 to 12,000 in three months and while officials said there may have been hiccups because of the sudden recruitments, there were attempts to sort this out. They said workers were mostly hired on contract through seven different contract agencies.” There have also been reports of differences between the permanent and contract employees in the plant.

The local Labor Commissioner also did not find any major issue with wage payments at the Wistron plant and no one raised any complaint with the Karnataka labor minister either. So the sudden outbreak of violence does raise eyebrows, and the arrest of the SFI leader and news of involvement of outsiders confirms our worst fears.

SFI or Student’s Federation of India is the student wing of the Communist Party of India-Marxist (CPM). It is notorious for instigating violence along with other left-wing organisations. In Kerala, a state ruled by CPM, this ‘student body’ is a law unto itself. It attacks police, vandalises temples, terrorises students who refuse to toe the Communist line, and an independent judicial commission concluded that SFI and other communist bodies had converted students’ union offices into ‘idi muri’ or torture chambers.

The Wistron violence comes at a time when electronics manufacturing in Bharat is just taking off, due to efforts of various Governments and success of the production-linked incentive (PLI) scheme which has boosted manufacture of mobile phones and their components, and is now being extended to manufacture of laptops and tablets.

Moreover, Bharat has a historic opportunity to grab a significant slice of the global tech supply chain due to US-China trade war and the Covid-19 pandemic, both of which have triggered a diversification within contract manufacturers that were earlier concentrated in China, known as ‘factory of the world’.

As per this report from a few months back –

“Taiwanese electronics manufacturers such as Foxconn, Quanta and Pegatron are leading a migration of production from China to new factories in Taiwan, Vietnam and India to cut costs and avoid U.S. tariffs while also addressing concerns surrounding security and intellectual property.”

Chinese-state affiliated media reporters were also found using the Wistron plant violence to mock and question the decision of Taiwanese companies like Foxconn and others to relocate to Bharat. So the role of SFI and other Communist organisations, that have a history of siding with Communist countries like China over Bharat, needs to be probed thoroughly and the real puppeteers behind the Kolar violence punished.