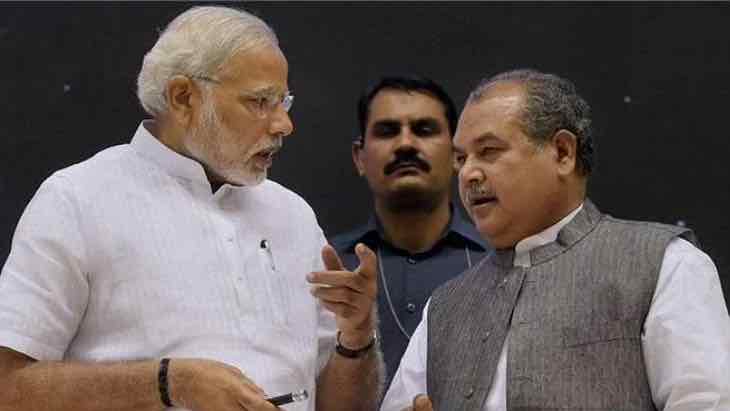 Union Minister Narendra Singh Tomar, who has led the Agriculture and Farmers Welfare Ministry since 2019, has figured among the top performing Ministers in the Union Cabinet with a score of 6.83 mainly due to the record grain production and progressive agricultural practices, reveals an IANS-CVoter Survey.

While the NDA voters gave him the 6.83 score out of 10 putting him on the 11th position, the opposition voters scored Tomar slightly less at 5.54 out of 10 pushing him to 14th rank out of 15.

What possibly has tilted the ranking to push the Minister into top 15 bracket is the record grain production along with the timely distribution of Kisan Samman Nidhi that offers direct transfer of Rs 6,000 per year in instalments to the farmers; similar direct transfers against the MSP for procurement of wheat/rice or designated grains; soil health cards; promotion of natural farming; and the Pradhan Mantri Fasal Bima Yojana.

Among the social groups, Tomar seems to be much popular with those that have had no formal education, said the IANS-CVoter Survey.

With a score of 7.24 out of 10, he has ranked third. With his connection to the roots, coming across as someone with knowledge about his field and speaking about his government’s scheme at any and every occasion, has prompted Tomar to be known as a farmers’ friend.

Tomar has been able to implement schemes and programmes that in turn have ensured Prime Minister Narendra Modi’s dream of record food grain production.

His Ministry has proactively promoted coarse grains/millets and ensured that these grains also are offered adequate MSP to wean away the farmers from paddy and wheat.

The survey was conducted on completion of eight years of the NDA government headed by Prime Minister Narendra Modi at the Centre.

The welfare and growth focus in Union Budget 2022-23