One Nation, One Ration Card reform rolled out in 9 states

In a major boost to citizen-centric reforms, nine states have now completed the One Nation One Ration Card reform revolutionizing the Public Distribution System (PDS). The Central Government has now allowed the states to borrow an additional 2% of the Gross State Domestic Product (GSDP) in the financial year 2020-21.

The government has provided information regarding the said reforms in its press release which we have reproduced below.

In view of the challenges posed by the pandemic for mobilization of financial resources, the Bharatiya Government has strengthened the hands of the States through multiple measures. These included a grant of additional borrowing permission of 2% of the Gross State Domestic Product (GSDP) in the year 2020-21.

This has enabled the States to mobilize additional financial resources to fight the pandemic and maintain the standards of service delivery to the public. However, to ensure long-term debt sustainability and prevent any adverse impact on the future, a part of the additional borrowing was linked to the States carrying out reforms in the sectors critical for service delivery to the citizens.

One of the sectors identified for reforms is the Public Distribution System. Out of the additional borrowing limit of 2% of GSDP, 0.25% is linked to the implementation of the “One Nation One Ration Card system”. This was aimed to ensure that the beneficiaries under the National Food Security Act (NFSA) and other welfare schemes, especially the migrant workers and their families, get ration from any Fair Price Shop (FPS) across the country.

Other aims of the intended reform were to better target beneficiaries, eliminate bogus/ duplicate/ ineligible ration cards, and thus enhance the welfare and reduce leakage. For this, the reform conditions stipulated Aadhar Seeding of all Ration Cards, biometric authentification of beneficiaries and automation of all the Fair Price Shops (FPS) in the State.

So far nine states have successfully completed reforms in PDS and implemented One Nation One Ration System. These States are : Andhra Pradesh, Goa, Haryana, Karnataka, Kerala, Telangana, Tripura, and Uttar Pradesh. On completion of reforms, additional borrowing permission of Rs.23,523 crore has been issued to them. The State-wise amount of additional borrowing permitted on account of implementing One Nation One Ration Card system is as under : 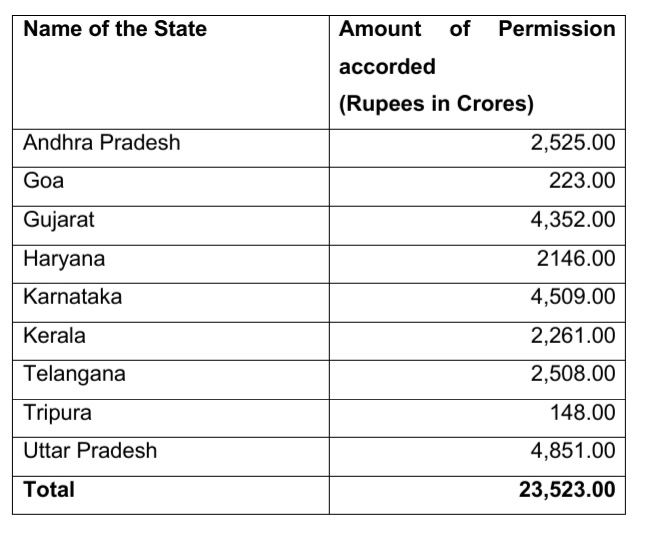 Department of Food and Public Distribution in the Ministry of Consumer Affairs, Food and Public Distribution is the Nodal Department to certify that a State has met the conditions stipulated for this reform. Further, to become eligible for additional borrowing, the States have to complete the reforms by 31st December, 2020. It is expected that many more States will complete this reform before the stipulated date.

In addition to the One Nation One Ration Card, other reforms specified as a precondition to avail additional borrowing are ease of doing business reform, urban local body/ utility reforms and power sector reforms.