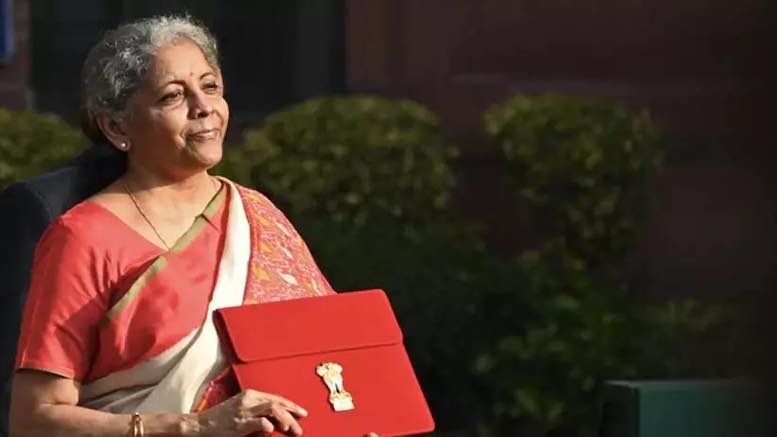 The BSE Sensex soared over 2,000 points on Monday afternoon after Finance Minister Nirmala Sitharaman completed her first digital presentation of the Union Budget for FY21-22.

Around 1.50 p.m., Sensex was trading at 48,346.88, higher by 2,061.11 points or 4.45 per cent from its previous close of 46,285.77 points. Banking and finance stocks surged after Sitharaman’s third budget in which she announced that two public sector banks will be privatised apart from the IDBI Bank and one general insurance company.

The FM proposed to unleash a massive fiscal expansion in 2021-22 on the back of fire sales and cesses, to revive Bharat’s pandemic-battered economy.

In her Budget speech that lasted for around 1 hour and 45 minutes, she doled out enormous amounts for railways, roadways, health care, education as well as the agriculture sector. She proposed to institute a ‘Land Bank’ monetisation company along with an asset management and reconstruction company or a ‘Bad Bank’ and a Development Financial Institution (DFI) with a capital of Rs 20,000 crore which will fund infra projects.

Besides, the finance minister laid out a new import structure along with proposals for a conducive environment to usher in investments into FinTech, insurance and Start-ups. Further, the minister set aside Rs 20,000 crore for public sector bank re-capitalisation and gave a push to digital payments and research in Artificial Intelligence.

On the other hand, to shore up the Centre’s revenues, she proposed an asset monetisation pipeline. She also set a massive divestment target of Rs 1.75 lakh crore. However, Covid-19 prevented the Centre in achieving the FY21 target, with collections only coming in at Rs 19, 499 crore.

In FY22, the Centre plans to divest two public sector banks, as well as a state-owned general insurance company. Even the IPO route will be considered for LIC to augment falling revenues. Sale of certain projects such as city gas pipelines, roads and ports are expected to give some relief to the Centre. But here as well, the fine print suggests hiving off these assets after their completion.

Nonetheless, an agriculture Cess on petroleum products, GST and other high-end items is expected to fill up Centre’s coffers. Consequently, the fiscal deficit for next year is set at 6.8 per cent from 9.5 per cent for FY21, out of which the Centre plans to borrow Rs 80,000 crore by the end of the current fiscal.

She announced a record sum of Rs 1,10,055 crore for Indian Railways of which Rs 1,07,100 crore is for the capital expenditure. She said the national transporter will monetise the Dedicated Freight Corridor (DFC) asset after commissioning.

She said that it is expected that the Eastern and Western Dedicated Freight corridor (EDFC and WDFC) will be commissioned by June 2022. The DFC is one of the largest rail infrastructure projects undertaken by the government, entailing a cost of around Rs 81,459 crore. The Dedicated Freight Corridor Corporation of India Limited (DFCCIL) has been set up as a Special Purpose Vehicle to plan, develop, mobilise financial resources, construct, maintain and operate the DFC.

In the first phase, the organisation will construct the Western DFC (1,504 route km) and Eastern DFC (1,856 route km), a total of 3,360 route km. Prime Minister Narendra Modi inaugurated the 306 km Rewari-Madar section of the Western Dedicated Freight Corridor on January 7 this year and 351 km Khurja-Bhaupur section of EDFC on December 29 last year.

To provide ease of compliance, Budget 2021 has also proposed to make dividend payment to REIT/ InvIT exempt from Tax Deduction at Source (TDS). Sitharaman announced that the government will launch a Securities Market Code in a bid to streamline the securities market. The Code will include SEBI Act, Govt Securities Act and Depositories Act. All these Acts will be amended for the Code.

Presenting the budget speech in a little under two hours, she also also announced that capital market regulator SEBI will be notified as regulator for a gold exchange. In another major announcement for financial investors, Sitharaman said that an investors’ charter will be launched which will be outline the rights of the financial investors.

The FM said that farmers are getting 1.5 times of the minimum support price (MSP) on procurement of foodgrains. In her Budget speech, the Finance Minister said that the procurement of crops will continue at the MSP.

One of the two main demands of the farmers protesting at Delhi’s borders for more than two months has been a legal guarantee on the MSP by the government. While the government has reiterated that the present system of procurement of crops at the MSP will continue.

Boost to start-ups, small firms and ‘ease of doing business’

With the Union government deciding to extend tax holiday claim for start-ups by one more year and incentivise the incorporation of one-person companies (OPCs), stakeholders in the industry have welcomed the moves, saying they will promote ease of doing business, promote entrepreneurship and boost investments.

Sitharaman said that the government will allow the growth of one-person companies without any restrictions on paid-up capital and turnover. One-person companies will also be allowed to make conversions into any other type of company at any time, according to the Budget provisions.

The Confederation of All India Traders (CAIT) on Monday termed the Union Budget 2021 as a “progressive and comprehensive document”.