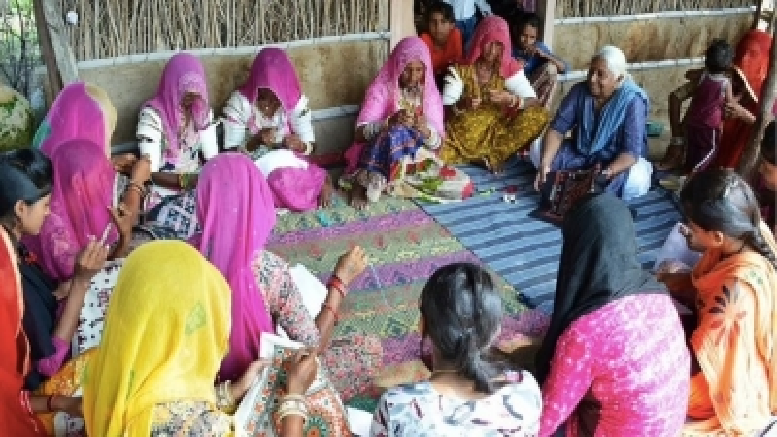 A social worker in Rajasthan is creating a sort of revolution by helping 15,000 women stand on their feet. Lata Kachhawaha of Barmer helped the women in selling their embroidery to foreign clients, earning a global identity in Kashidakari, a traditional form of handicraft which has been passed down through generations.

This kind of embroidery is used to decorate shawls, handkerchiefs, bed covers, cushions and bags, among a host of other items.

Speaking to IANS, Lata said, “Three decades ago, life in Barmer was quite different as there were very few women working in fields. While there was one woman posted in the Home Guards department, there were two to three widows serving in schools. So bringing out women to fields to work was quite challenging but it was not impossible,” she says.

“Basically, I was from Jodhpur and had come here after my mother’s demise for a change when I was 22. Social work was something which impressed me and hence I joined Magraj Jain who was the founder of Sure (Society to Uplift Rural Economy) as I was instantly inspired by the work he was doing.”

She said, “We started imparting training to women from Barmer villages in groups counting to 100-150 and 200 and in the next 20 years, this number touched 15,000. These women have been linked to different groups/markets to sell their work and earn a decent living. Our women are now trained in quality maintenance and fixing costs in the international market.”

In fact, this art has also brought fame and laurels in foreign countries as the products made using this embroidery have been showcased in countries such as Germany, Japan, Singapore and Sri Lanka in various exhibitions.

However, a few decades ago, this embroidery was limited to families and was given as dowry to decorate homes or was gifted to family members. But today, renowned brands such as Fabindia, Ikea, and Rangsutra get a large part of their material from the women of the Meghwal community in Barmer.

Narrating the condition of Barmer when she started working, Lata says, “The conditions in Barmer were tough at the time when I came as droughts were regular features. Also there were no roads and transportation and communication in remote areas was a challenge. Further, the biggest issue was water shortage.”

“We saw how women who were working with their embroidery art were fleeced by a few merchants acting as middlemen who sold kashidakari items in the market, leaving families to receive very little income, mostly Rs 200.”

Most of these women are adept in kashidakari embroidery and are from the Meghwal community whose families had settled here post the 1971 Indo-Pak war.

“So we aimed at preserving and promoting Kashidakari art, while ensuring these women attain financial independence. Hence we started a programme with 224 Pak-oustee women in the town.”

“In 1994, we took these women to Delhi Haat which was their first train ride and their experience boosted us to take more big initiatives,” she says.

“Today, generations of women are involved in this work, and even the daughters of these households are earning as well as being able to study,” she says.

Lata has been recognised by the Government of Switzerland and felicitated with the International Prize for Women Creativity in Rural Areas, as well as the Mahila Shakti Award and Senior Citizens Service Award by the Rajasthan government.

She remembers her mother and says, “She would tell me that while society has many ways to dictate what a woman should or should not do, I should stay focussed enough to carve my own path. She encouraged me to be educated, and I finished my postgraduate degree in law before coming to Barmer. Her words inspired me to ensure that other girls had the opportunity to realise their dreams,” she says.

Kanhaiyalal’s murderers produced in NIA court, charges to be heard on Jan 10