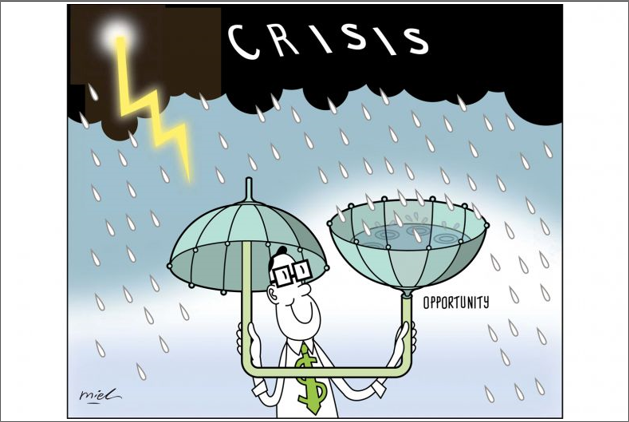 Coronavirus (COVID – 19) originated in China in December 2019 and has spread fast in several developed and developing countries. It has claimed more than 3 lakh lives and infected more than 4 million people globally as on May 18, 2020. None of the country seems to be spared by the virus. It has spread very fiercely in Italy, France, United States (US), United Kingdom (UK), Spain and Russia to name a few.

In fact, though a much higher percentage of Gross Domestic Product (GDP) (8 – 10%) is spent by these countries on health care, they are unable to stop the havoc caused by this virus. The developing countries like Indonesia, Brazil, Bharat, and the entire African continent are also trying hard to reduce the spread of the virus.

Though the virus does not discriminate between the rich and the poor, the developed and the developing, and affects both of them equally, it is the lack of availability of essential resources, to fight away the virus that makes all the difference. So, the rich may go to islands during the quarantine/ lockdown period to save their lives.

However, 10 countries in African continent do not even have ventilators, safe water, and other such basic necessities to overcome the virus. Forget about going to some other place to escape the virus!

Fortunately, the situation had been much better in Bharat so far, especially when it comes to the number of deaths due to the coronavirus (even better than few of the developed countries). However, the virus seems to have been growing exponentially even in Bharat now. There have been more than 3,000 deaths as on May 18, 2020 in the country. However, the number (of deaths) stands at more than 90,000 in US and more than 30,000 in Italy during the same period of time.

Few of the reasons for a somewhat slow spread of virus in Bharat (in comparison to US and Italy) could be the timely intervention by the government in announcing and effectively implementing the lockdown and the time that we have got to prepare ourselves against the virus (when comparing to Italy). However, even in Bharat the poor and migrants are having sleepless nights as they are highly uncertain about their future.

The government of Bharat hardly spends around 3.5% of GDP on health care. Hence, we have no option but to flatten the curve by declaring lockdowns and extending it. In addition to this, the developing countries have to deal with various tradeoffs. So, the migrant laborers in Bharat had no option but to walk back to their villages to survive (after the transportation facilities were closed down and they were not allowed to stay without paying rent to their owners). Hence, the government of Bharat has been trying to figure out ways through which the poor may not have to die of starvation during lockdowns.

Realizing the hardships faced by the migrants, the government has finally come up with a decision to allow these people to get back to their villages. However, the migrants that have gone back to villages may find it extremely difficult to get back to work. It is being suggested that the migrants can be brought back to cities by arranging separate transportation facilities for them. So, gradually the importance of the migrants/ the poor is being realized.

Otherwise, though the lockdown is relaxed, the trucks would be without the drivers, factories without workers, and the city dwellers may ultimately find it extremely difficult to manage the day to day activities without the services that are usually provided by the migrants.

The economy of Bharat is facing a sharp slowdown due to the coronavirus. Hence, the government has relaxed the lockdown norms for certain sectors during the lockdown 4.0. In addition to this, liquor shops have been opened so as to get revenue out of its sale. Besides this, the people are provided ration through the Public Distribution System.

Many businessmen, Non – Government Organizations (NGOs), philanthropists are also coming forward generously. A whopping stimulus package worth Rs. 20 lakh crore (10% of GDP) has been announced by the government of Bharat. The Reserve Bank of India has also been playing an accommodative role by reducing the repo and reverse repo rates and announcing various liquidity measures.

Though the life may get back to a ‘new normal’ gradually after controlling the spread of COVID – 19, the world economy may get gripped into recession; inequality may worsen further as the poor will get poorer and many more will fall deeper into poverty and would be unable to get out of it soon. Hence, various efforts taken by the governments and international organizations to bring the poor people out of the pool of poverty may just get wiped off by this pandemic.

Increasing the amount of public expenditure spent on health care, providing health insurance to the citizens, regulating private healthcare and strengthening the social security mechanism of the country may help us a long way in promoting welfare and thereby uprooting the ill – effects of such pandemics in the future.

Finally, to take advantage of shift of power dynamics from China to Bharat, that may take place in the near future, there is a need to unleash massive reforms in Bharat to become a manufacturing powerhouse. A change in the mindset of our bureaucracy to become facilitators could enable us further to become a super power.

-Dr. Shilpa Deo (The author is an Assistant Professor at MIT – WPU, Pune)