Google’s investment in Reliance Jio is good for Bharat’s economy, but we must draw some red lines 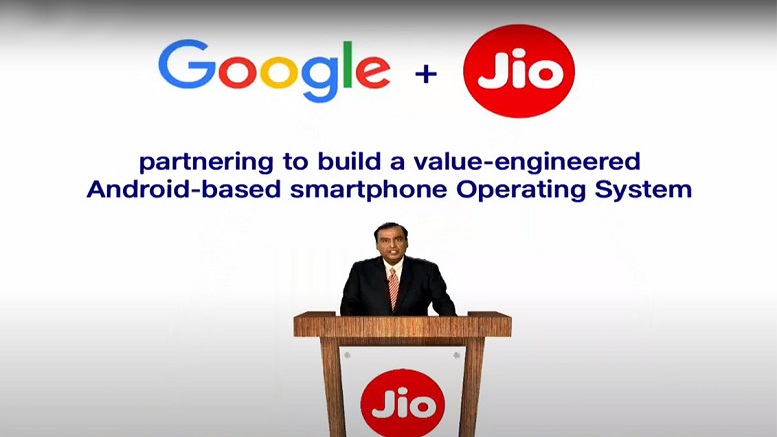 Before we discuss the the recent stream of foreign investment in Reliance Jio, let us see some history. When the Europeans first arrived in Bharat in 1498, the Bharatiya Kings welcomed it. Bharat was the workshop of the world. Bharatiyas had large ships, huge trade and famous merchants who had colonies from Egypt to China. Indeed, Vasco Da Gama was led to Bharat by a Bharatiya merchant who had a ship multiple times the size of Gama’s ship. Europeans became junior partners in the trade with Europe.

The Portuguese were the first to mount artillery weapons on ships, thus making them able to defeat much bigger ships easily. By the time they reached Bharat, they had the best Navy in Europe with ships fitted with canons. On this basis, they built their power and within a few decades, they had the monopoly on cargo transport in Indian Ocean.

They were infamous for sinking ships who had not taken ‘permits’ from them. They did not spare even Mughal shipping and all people going to Haj also had to pay them or risk being killed or enslaved. Bharatiya Kings tolerated this as trade with Europe brought prosperity to their Kingdoms, their farmers and their artisans. They saw no threat from a group of pirate merchants who had only small possessions of land in a few places in Bharat. The rest is history.

On July 13, Prime Minister Narendra Modi had a talk with Sundar Pichai, the CEO of Alphabet, parent company of Google. The same day Google announced investment of $10 billion (approx. Rs 75000 crore) in Bharat over next 5-7 years, “through a mix of equity investments, partnerships, and operational, infrastructure and ecosystem investments.” Just yesterday on July, 15th, Google and Jio announced that Google will invest approx. Rs. 34000 crore in Jio.

It is to be noted that in recent weeks Jio has attracted investment worth more than Rs. 1.5 lakh crores from companies such as Facebook, Qualcomm etc. and many investment firms. A $15 billion deal of parent company Reliance Industries with Saudi Aramco is also in the works.

What is the reason behind foreign investment in Jio and other Bharatiya companies?

The COVID19 crisis, the US-China trade war and the current military actions of China have dented the position of China internationally. Its companies, specially Huawei and ZTE, are being banned in many countries on charges of being associated with Chinese Communist Party. US and its allies are leaning towards ‘clean’ companies that do not spy on people. Jio was recently declared one such “clean telco” by Mike Pompeo, Secretary of State for USA. It has declared that it has the capacity to deploy a 5G network in Bharat based on totally indigenous equipment, which it apparently developed after it acquired Radisys, a Portland, US-based company in 2018.

Bhartiya companies are known to be open, innovative and culturally diverse. This is one of the reasons that in many countries of Africa, Bharatiya companies like Airtel and Bajaj are leaders in their sectors. These qualities signify potential and are likely to attract investment in Bharatiya companies in near future.

Bharat is a huge and growing market. It has a large aspirational middle class, the size of almost the whole US population, and its discretionary spending has been increasing. No large company can choose to ignore Bharatiya customers today. So we have seen large investments by Walmart, Amazon, Google, Qualcomm etc. in the past. This factor is likely to motivate companies to invest here, produce here and make not only ‘in Bharat’, but also ‘for Bharat’.

Bharat has a large youth population who are very eager to work in formal sector jobs. Many of these are skilled, but many more are not. However, with on-the-job training, Bharat can offer a significant arbitrage on labor cost to countries such as China. If the factor market issues are resolved, Bharat can attract much more capital, not only in brownfield, but also greenfield projects.

What we should be wary of?

Of course, the ultimate goal of companies is profit and they will come to Bharat looking for the same. That is why the European traders and companies came to Bharat initially. There could be a number of issues that can lead to friction between such companies and govt of Bharat. If the govt does not clarify certain red lines, these companies may become too powerful. We must remember that even till 1950s certain companies were deposing Presidents and practically running the country in ‘banana republics’. What are the factors we should be wary of?

The issue of taxation should be sorted urgently. Big corporations who derive substantial income from Bharat should pay taxes in Bharat too. Else, it becomes unfair to Bharatiya companies and promotes monopoly of foreign firms. For example, take a new social media platform from Bharat. If other dominant foreign social media or advertising platforms pay no taxes in Bharat, and minimal taxes in the country of origin, and a Bharatiya startup has to pay GST as well as Income Tax, which one will survive and expand?

If investment is made in brownfield projects, the control of technology and intellectual property should remain in Bharatiya hands and if it is made in greenfield, we should ensure transfer of technology. That is how China built its economy.

The issue of privacy and data protection has attracted substantial interest and discussion in Bharat. Govt appointed Justice Srikrishna Commission has recommended data localisation and protection. This should always be made a priority. In today’s world, data is the new ‘oil’. Bharat’s 1.3 billion people need to be protected from data theft and manipulation. An example of what data is capable of doing today can be seen in yesterday’s massive twitter hack.

A big issue, specially in case of social media companies, is interference in elections. The Cambridge Analytica episode brought it to the forefront of discussion. Social media companies wield immense power of narrative building. It is important that they stay neutral from politics. In case they favor opposition, anarchy is a possibility; in case they favor the govt, dictatorship is.

There is no doubt that Bharat needs foreign investment for economic growth, for reducing unemployment and for becoming a $5 Tn economy. But Bharat should draw some red lines and clarify the same to such investors. The Chinese way of closing our digital space to outsiders might look attractive and will certainly promote indigenous companies, but it can also lead to dictatorship.

For an ‘aatmanirbhar’ Bharat, digital sovereignty is a necessary condition. We definitely need our own digital ecosystem. That is the only way Bharat can assume leadership position in the technological age.