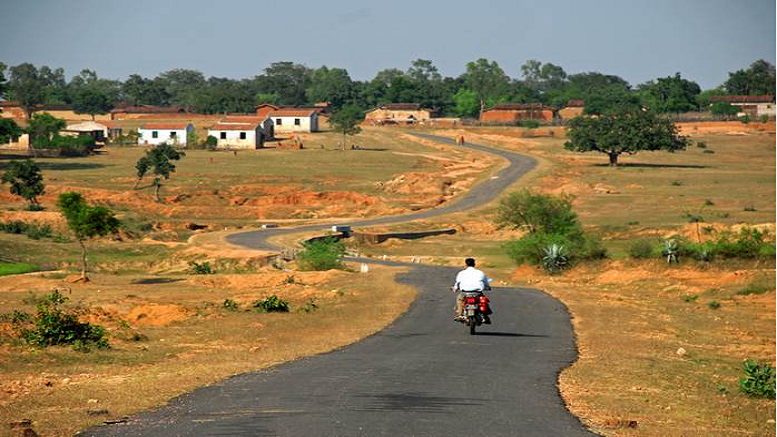 The Pradhan Mantri Gram Sadak Yojana (PMGSY), was launched by the Government of India to provide connectivity to unconnected Habitations as part of a poverty reduction strategy.  About 1.67 lakh Unconnected Habitations are eligible for coverage under the programme. This involves construction of about 3.71 lakh km of roads for new connectivity and 3.68 lakh km under upgradation, totaling to 7.39 lakh km.

Under PMGSY has so far 6,23,429 kms roads have been laid since 25th December, 2000 when this programme was launched. While the PMGSY does not cover villages with a population of less than 250, it applies to all villages where the population is more than 500 and those villages in the 250-500 category that fall in hilly areas (northeast, Sikkim, Himachal Pradesh, Jammu & Kashmir and Uttarakhand), desert areas, Schedule V areas and tribal and backward districts.

This is despite the fact that Bharat is the second largest producer of fruits and vegetables, producing around 97 million metric tonnes of fruits and 178 million metric tonnes of vegetables annually. Spending on organised warehousing in Bharat constitutes nine per cent of total logistics spending, as against 25 per cent in the US, suggesting the low prioritisation of the sector.

During the peak production period, the gap between demand and supply of cold storage capacity is approximately 25 million tonnes, which creates strain on the existing system. (Centre for Public Policy Research, December, 2016)

The village roads in Bharat suffer from poor quality. According to the findings of World Bank Report in 2011, Bharat’s Public Distribution System (PDS), which consumes around one percent of the country’s GDP and covers up to 25 per cent of the poor households, only 41 percent of the food grain released by the Government reach the beneficiaries and one of the major reasons are poor storage and bad quality of roads in villages that contributes to storage and transportation losses.

According to a study by National Centre for Cold Chain Development, in 2014 there is a shortage of 3.28 million tons of cold storage in Bharat and more particularly in rural areas.  A truck in Bharat can cover only 250-300 km a day as per the study carried out in 2007 compared to 700-800 km in US and Europe (This is according to a joint study by Transport Corporation of India (TCI) and IIM-Calcutta.)

The transport cost of a cargo container over one km in Bharat is 50% higher than what it costs in the US. Pot holes and bad roads due to poor quality of road construction are the main reasons for the problems mentioned above.

Pot holes and bad roads lead to lot of road accidents in Bharat. The social cost of road accidents in Bharat is estimated at 3% of GDP, whereas the same is between one to two percent of GDP for developed countries. Semi-urban, rural and village roads face the challenge of  poor quality of roads and higher maintenance costs that are recurring in nature due to cost constrains in going for good quality roads adding further to the  long term financial burden.

Poor quality of roads is one of the major factors for road accidents in Bharat. Through adequate repair and maintenance of the main arterial network an amount of Rs.15,000 crore per annum could be saved out of which Rs.2500 Cr alone would result in fuel savings which in turn would result in major savings in foreign exchange since Bharat imports major portion of its fuel requirements. (As per the study of World Bank in 1990).

Several studies world over have shown that better road connectivity of the villages also leads to greater access to education and healthcare. There are two major challenges in developing rural road network in Bharat.

There is an urgent need to address the issues of poor quality of village roads, bad connectivity between production centres and markets, lack of proper cold chain facility like refrigerated transportation, ware-housing by establishing proper linkages.

This article proposes construction of plastic roads in order to improve the quality of village roads and construction of solar power roads that could provide alternative revenue generation models in lieu of toll charges.

Dr. R. Vasudevan, Dean and Head of the Chemistry Department, Thiagarajar College of Engineering (TCE), Madurai is known as plastic man. He and his team at TCE pioneered the concept of converting waste plastic into effective substitute/ adhesive to bitumen in building plastic roads. Indian Roads Congress (IRC) has recognized the efforts of Thiagarajar college of engineering (TCE) in December, 2013 by giving national level certification to their technology vide their ref no. IRC: SP: 98: 2013.

This technology has been successfully tested in Tamilnadu, Himachal Pradesh, and Jamshedpur town among several other parts of the country in the construction of plastic roads. More than 1,00,000 kilometers of plastic roads have been laid in at least 11 states in Bharat. (September, 2018).

The Central Pollution Control Board and the Indian Roads Congress, two leading Government bodies, have endorsed the methodology adopted in construction of these plastic roads. Multilayered wrappings consisting of plastic, polyester and aluminum occupy the major quantum of waste in the country that is very difficult to recycle in normal course. These multilayered wrappings, however, can be shredded and reused as substitute for bitumen in road construction.

Therefore, this offers a huge potential to put these categories of plastic waste which is difficult to recycle, to the best possible use in road construction and find a permanent one time solution to this problem which is a global phenomenon.

Studies also show that even if plastic is banned, it cannot be completely nonexistent. It is a by-product of diesel and petrol, and if unutilized, will be found in overflowing sewage, rivers and oceans. India generates more than 25,000 tonne of waste plastic every day, 40% of which remains uncollected and littered in the environment.

It is estimated that the total plastic waste available in the country would not be adequate if all the rural roads in Bharat are converted into plastic roads!

Low cost – mixing of the processed waste plastic liquid with bitumen results in cost savings of around Rs.25,000 per km in laying the road.

Simple technology– the technology involved is simple as it only requires segregation, processing of waste plastic and conversion of the same into liquid form.

Water proof roads– plastic roads do not have pot holes and last much longer than the normal bitumen or even concrete roads.

Environmental conservation– avoiding dumping of waste plastic into rivers, oceans and sewage systems will result in preventing the exposure of other living beings on earth, rivers and oceans to the hazards of waste plastic.

Plastic roads are a boon for Bharat’s hot and extremely humid climate, where temperatures frequently cross 50°C and torrential rains create havoc, leaving most roads with gaping potholes. Field studies have also proved a decrease in the deflection and roughness of the plastic road surface compared to that of conventional bitumen.

This in turn reduces vehicle operating cost and travel time. Also when waste plastic is properly segregated from municipal waste, such municipal waste gives more quantum of compost which is useful for farmers.

Bharatiya scientists at Gujarat Energy Research and Management Institute (GERMI) have suggested the construction of roof top solar panels on the roads particularly on national and state highways, which will be relatively less expensive and more durable than the direct solar power roads ventured abroad (China, France and Netherlands) that have solar panels on the surface of the road covered by unbreakable glass. Additionally these roof top solar power roads provide shelter to the roads leading to lesser repairs and maintenance costs.

These Bharatiya scientists estimated that a PV roof cover over the four-lane 205 km Ahmedabad-Rajkot highway can generate 104 MW of power while the Ahmedabad-Vadodara highway, 93 km long, can reap 61 MW of electricity. Therefore on a conservative basis the existing network of national highways that cover a distance of 1,32,500 KMs have the potential to generate 66,000 MW to 70,000 MW (66-70 GW) of solar power. Bharat has an installed capacity of 370 GW as on 31 st March, 2020. The current state highways and other road network in Bharat covers a distance of 1,56,694 kms and 56,08, 477 kms respectively.

Therefore, Bharat’s rural road network has an immense potential to generate solar power that can meet not only the demand of the rural population but the semi urban and urban population as well. State Highways and District roads built under PPP model where the road contractors are struggling to collect toll revenues can be converted into roof top solar power roads that provide scope for alternative mode of revenue generation.

To start with plastic roads with roof top solar power roads concept can be experimented in state highways and district roads as alternative revenue models in lieu of toll collection charges under BOT Models. This will provide a cover/shield to the roads from rough weather conditions and ensure preserving the quality of the roads for a longer period necessitating lower future maintenance costs.

Rain water conservation can also be done as the roads will have solar power roof tops, thereby preserving and enhancing the ground water resources nearby these roads.

Therefore, laying of rural roads provides scope for better connectivity between production centres and markets for the farmers. Government is not in a position to offer cold storage facility and proper ware housing at most of the interior parts of the rural Bharat. According to a study conducted by NCCCD (National Centre for Cold Chain Development), in 2014 Bharat needed 350 Lakh Tonnes cold storage capacity whereas the available cold storage capacity as on October, 2019 was 226.7 Lakh Tonnes.

Therefore, road contractors may be induced to build cold storage facility and ware houses as well under PPP Model along with construction of plastic roads with roof top solar power in an integrated manner, which will enhance the scope of revenue generation on long term basis in view of the immense potential offered by the cold storage facility and ware houses. This will also solve the rural supply chain gaps in Bharat and bring a major relief to the poor farmers.

Since most of the district headquarters and other important towns in rural areas have Government bus depots/ terminals that hold vacant land bank, the cold storage facility and ware houses can be built in these strategically located vacant land banks under PPP Models on revenue sharing basis between the road contractors and the respective state Government transport departments/ ministries. This will ensure not only proper storage of the agricultural produce of the farmers but also access to smooth transportation of the same to the markets.

The suggestions in this article lead to developing an integrated model covering both plastic and solar power roads which is eco-friendly, helps in conservation of rain water, avoids frequent recycling of waste plastic, generates renewable energy  and also improves the cold storage and ware housing facilities in the rural areas.