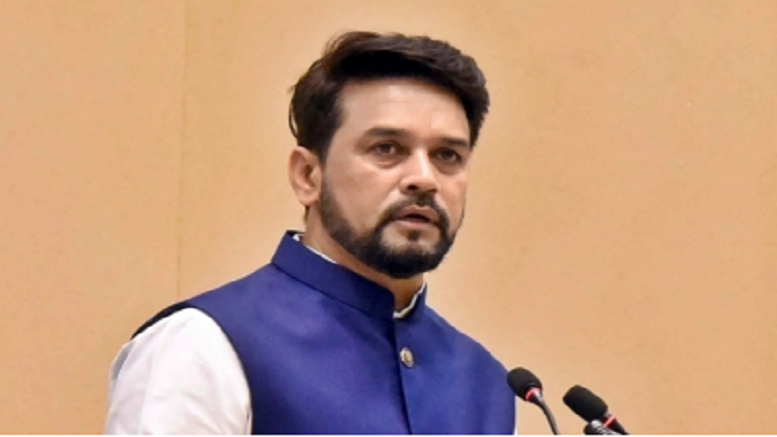 Bharat’s first Budget after the outbreak of the Covid-19 pandemic is prudent, transparent and futuristic and is aimed at making the country self-reliant, Minister of State for Finance, Anurag Thakur, told IANS.

Following are the excerpts from the post-Budget exclusive conversation IANS had with Thakur.

Q1. What were your first thoughts regarding the economic impact that will occur due to the Covid-19 lockdown? What was your first reaction?

Ans. Today, you can see that Bharat has emerged stronger from this pandemic. We know what happened in those countries which did not impose the lockdown or those that did but were not able to save as many lives.

Bharat on the other hand emerged as one of the countries with the lowest mortality rates as we implemented a systematic lockdown. This was our main goal — to save as many lives — as possible.

Besides, we have grown our capacity. Earlier, we had negligible manufacturing of PPE kits, today we are a major exporter. We are also exporting vaccines which have been made in Bharat to around 100 countries.

Our approach has been to save lives and livelihood, and the results of the same can be seen.

We had taken steps to support the MSME sector and the economy by the way of additional funding, there was also the loan moratorium as well as other schemes and steps which were taken such as partial credit guarantee scheme, additional working capital loans that were given to protect businesses and jobs.

Q2. Is the worst behind us in terms of economic shock that was unleashed by this pandemic?

Ans. If you look at the projections, the International Monetary Fund (IMF) expects Bharat’s GDP growth to be over 11 per cent in FY22, while the RBI’s estimates show a growth of around 10.5 per cent. Bharat is seen as the only major economy in the world to have a double-digit growth next year.

This recovery has been made possible because of the structural reforms that we have undertaken under the AatmaNirbhar Bharat package. These reforms range from power, coal, agriculture to defence production, mining and space sector amongst others.

These reforms were even bigger than the ones carried out in the 1990s decade. The Prime Minister has turned this crisis into an opportunity which has given the pace to this recovery.

This V-shape recovery has been made possible due to the measures taken to combat the Covid-19 pandemic, and the historic reforms that were implemented to support the economy.

Q 3. With stepped up expenditure, as is also visible in the Budget proposals, to counter the adverse effects of the pandemic, are we moving away from the path of fiscal consolidation?

Ans. We have to look back at the period of 2013-14. Bharat was known as among the fragile five economies under the Congress-led UPA Government. After 2014, for the next the Narendra Modi government gave more than 7.5 per cent growth rate, every year, on an average. Now we are among the top six big economies of the world.

What is the challenge in the financial year, 2021, which was the Covid-19 year. For us it was important to borrow and more than Rs 12.5 lakh crore has been borrowed by government of Bharat to give food grains, funds, subsidies, to those who actually require this. More than 80 crore people got food grains, pulses for a period of eight months. No other country was able to even afford that, but Bharat did it.

Also, 30 crore women have been given Rs 31,000 rupees in their Jan Dhan accounts by the government. Three crores disabled, especially abled, widows and old age people have got more than Rs 3,000 crore, farmers got more Rs 1.10 lakh crore. And during the pandemic time, they got thousands of crores rupees into their bank accounts.

Apart from this, the EPF contribution of the employer and employee has been paid by the Government of Bharat totaling about Rs 7,000 crore. Now that kind of money was required. You also wanted to help the states to fight the pandemic.

So, virtually for the first three months, the economy was shut in a way and no economic activity was taking place. So, what could you do as a country, you have to borrow and help people.

So, I think it is very important for us to borrow, build, monetize and then repay. It will help the Bharat’s economy to grow, create more jobs, and also be among the top leading economies where the growth will take place.

Q 4. The privatisation policy announced in the budget has not found favour in several quarters with certain sections of the political class terming it as an exercise to sell the family silver?

Ans. We have to see the government’s decision on privatisation in perspective. The UPA government also tried to do this during the Prime Ministership of Manmohan Singh. But they could hardly raise about Rs 10,000 crore from 2004 to 2009. But the Modi government raised close to Rs 3 lakh crore between 2014-2019. That is the big difference.

You have more credibility. You can deliver better. You could have that transparent policy for the disinvestment. We have also divided the companies into priority and non-priority sectors and disinvestment will be based on this categorisation. This while giving opportunity to the government to mobilise more funds will also help companies to grow up the ladder with the infusion of fresh capital that will also generate more opportunities for employment.

If in the operation of certain entities, PSUs are not able to do well or the government has too many players in the field, why not to pursue privatisation initiative involving change of management. Government job is not to be in business but to facilitate more people to do more business activities and the government should get more revenue out of it.

Q 5. So, through budget proposals as well, the government wants to make a statement that it is solidly behind the economy?

Ans. Absolutely. Economy needs investment and sentiments improve once the government invests. So, when the government itself increases capital expenditure next year by 35 per cent, it would give a necessary boost to the investment climate in the country and help improve the health of the economy and generate more employment opportunities for its people.

Worldwide experience has proven that economies where the government initiates the investment, the growth pick up is faster. This also helps to bring in private investment. The multiplier effect of capital expenditure 2.5 times. The budget also aims to achieve this with higher capex.

Q 6. Will the higher capex announced in the Budget, are we on course to become a $5 trillion economy faster?

Ans. The growth of any economy takes time. But for Bharat, we became the sixth largest economy in the world from earlier eleventh in a matter of just five years. Our effort to raise economic growth has continued but with Covid-19 pandemic we have lost one full year. Any economy takes time to recover from acute slowdown. But the steps that we have taken, have ensured that the recovery is faster.

We presented a good budget that was also acknowledged by the capital markets with a consistent rise over the past few days. This clearly shows that if you take the right steps, the overall sentiment improves and investments too picks up.

Q 7. You have also announced privatisation of two public sector banks and one general insurance entity. These announcements have already evoked sharp reactions from bank unions. How do you aim to pursue this critical disinvestment plan?

Ans. During the UPA time, the way the funds were distributed to the banks and loans were given, putting the banks in a difficult situation that were also having higher NPA ratio. And this year, there was a reduction in the NPA ratio by 20 per cent. So that clearly showcases that we have done well in the last five six years.

We have done the asset quality review of the banks; we have done the recapitalisation of more than Rs 5.5 lakh crore for public sector banks. Bharat needs more facilities for the consumers or the people who bank. Then what do you do. You have 12 banks.

We have done the amalgamation/ merger of banks, we have strengthened the banks, brought them out of the PCA framework. But the government can’t keep on investing in the banks, every year. They have to stand on their feet, or they have to earn, they have to be more profitable.

That is where we said that out of 12, even if the government does the privatisation for two, and one insurance company, it will also help the employees also to get better salaries and to get more benefits, and those banks and insurance companies can also grow.

If the present management is unable to do justice then the new management could be able to do so. If we look at the past experiences, most of the companies have grown manifolds and the employees are also very happy.

Q 8. But will the government take bank employees into confidence before stating the privatisation process?

Ans. The Government will take all steps that are required for healthy disinvestment.

Q 9. Will we also see weaker banks that are in prompt corrective action (PCA) framework being put in the sell off list?

Ans. We have to think from buyers’ perspective also. We have to offer something to buyers that attracts investment.

Q 10. The budget has put a cap on tax free interest earnings on individual savings put in provident fund (PF) and ULIPs. Is this not reducing the shrinking list of avenues available to salaried to save in instruments that offer security and assured returns?

Ans. Many have taken advantage of investment in PF that give tax free assured returns. But this advantage is also being taken by high net-worth individuals (HNIs), some of whom have put over Rs 2 crore into their PF accounts. This raises a question, whether the savings is for workers or for ones who have amassed huge wealth and are depositing in excess Rs 50 crore in PF accounts in a year and taking 8 per cent tax free returns.

Q 11. The Budget is yet to be passed by Parliament. Is the government looking to bring more changes in the Finance Bill to further strengthen proposals required for putting on path of a speedy recovery or there is a rethink on some proposals that may be rolled back?

Ans. I think we have covered everyone from youth to women to farmers to the common man or traders. We have tried to take care of all the sectors. Even if you look at the scheduled caste and scheduled tribes, there is an increase of 51.65 per cent in the budgetary allocation.

So, the government has taken care of several sectors and a scientific thought process has gone behind devising schemes for each sector so that a larger population benefits from this Budget.