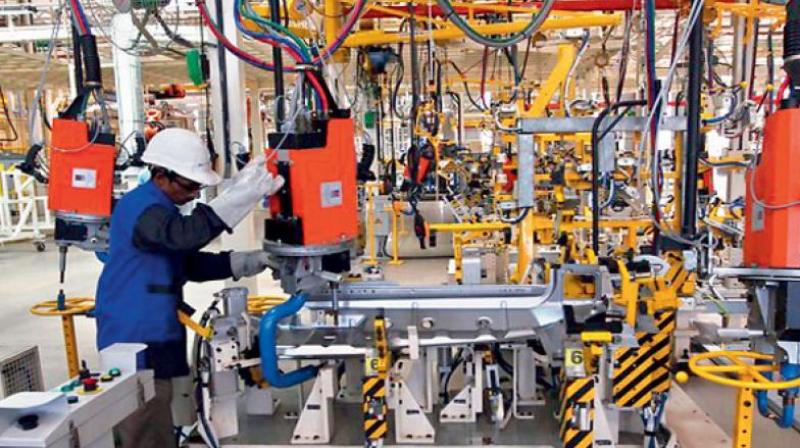 According to a private survey, it has been established that Bharat has witnessed a nearly eight year high in manufacturing activity in the month of January. This was made possible due to substantial growth in new orders and output. Evidently, this implies that the economy is getting back on track.

Manufacturing sector provides a substantial contribution to the Gross Domestic Product (GDP). It is also a significant employment provider. Thus, with an increase in the demand of goods, factories have started hiring more employees with a rate that is much higher than the past seven years.

What one needs is the continuity of such growth that will certainly lead to a boost in the economy which was much needed after the slow growth that was seen in the July-September quarter in 2019.

The Nikkei Manufacturing Purchasing Managers’ Index (PMI), compiled by IHS Markit, bounced to 55.3 in January from 52.7 in December. This reading is the highest that one has observed since February 2012. Further, a reading above 50 points indicates growth as opposed to decline in the economy.

In a news release by Pollyanna De Lima, principal economist at IHS Markit, it was said “The PMI results show that a notable rebound in demand boosted growth of sales, input buying, production and employment as firms focused on rebuilding their inventories and expanding their capacities in anticipation of further increases in new business.”

With an increase in overall demand, there was considerable improvement in new business, input buying, employment and exports in the month of January. This was simultaneously supported by improvement in business sentiment that led to softer rise in both input costs and output charges.

Manufacturers have hired at the highest rate since August 2012, all thanks to boom in the overall demand which was the highest since December 2014 according to a new order sub-index. This was supported by the rapid growth in output in over seven years.

Companies noted that better demand and client requirements have led to the biggest business absorptions in over five years. A substantial increase in new export orders, fastest since November 2018, have led to a further rise in total sales.

Jobs have been coming up in the manufacturing sector due to new business growth as well as several upcoming projects. This has further increased hiring which is at its strongest in the last seven years.

The whole scenario was supported by low rise in input costs and output prices, which may result in lower overall inflation and not as high as 7.35% observed in December 2019. Consequently there will be less pressure on the central bank to come into picture ever since a 135 basis points cut  last year.

“To complete the good news, there was also an uptick in business confidence as survey participants expect buoyant demand, new client wins, advertising and product diversification to boost output in the year ahead,” added De Lima.