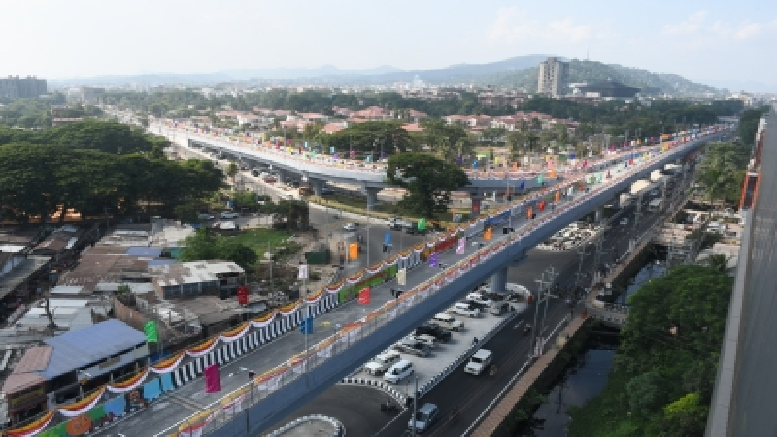 Decades-old inter-state boundary disputes and militancy problems are expected to make a significant headway in 2022, while work for Bharat’s first international multi-modal logistic park (MMLP) at Jogighopa in western Assam would witness a considerable progress in the new year leading to a big boost to the connectivity with the neighbouring countries.

Ministers, officials, experts and economists are optimistic that the crucial issues of Assam, including the long pending inter-state boundary disputes, are likely to achieve a vital outcome in 2022 as these issues have seen progress being made since 2020 with all the stakeholders working together with seriousness.

Sushanta Talukdar, a renowned political commentator in the Northeast region and writer, said: “The concerned Northeastern states, specially Assam have taken joint efforts and already held a series of meetings in 2020 to resolve their inter-state boundary disputes. The Central government already asked the Northeastern states to mutually settle the boundary disputes through bilateral talks.”

“The MMLP at Jogighopa is expected to achieve a major change in connectivity with the neighbouring countries leading to boost trade, tourism and people-to-people relations. The ambitious project would be a game changer not only for Assam but also for the other Northeastern states,” Talukdar, the editor of multilingual online portal ‘Nezine’, told IANS.

The MMLP at Jogighopa with an initial investment of Rs 693.97 crore and an overall investment of Rs 3,000 is scheduled to be completed by 2023. The MMLP at Jogighopa being made by state-owned National Highways and Infrastructure Development Corporation Limited, will provide direct air, road, rail and waterways connectivity to the people and is being developed under the ambitious Bharatmala Pariyojana of the Government of India.

The state’s border dispute cases with Nagaland and Arunachal Pradesh are before the Supreme Court, but there are no cases on the inter-state disputes with Meghalaya and Mizoram. According to the Government of India documents, of the seven inter-state border disputes in the country, four are in the Northeastern region and these include Assam-Arunachal Pradesh, Assam-Nagaland, Assam-Meghalaya and Assam-Mizoram.

Assam Chief Minister Himanta Biswa Sarma, who already held separate meetings with his counterparts of Meghalaya, Mizoram, Nagaland and Arunachal Pradesh to resolve the border disputes, said that in the New Year the long-pending border issues would be resolved to a large extent.

“I have held several meetings with Meghalaya Chief Minister Conrad K. Sangma. Assam and Meghalaya would resolve the six of the 12 inter-state border disputes before January 15. I have also recently held separate meetings in New Delhi with Nagaland Chief Minister Neiphiu Rio and Mizoram Chief Minister Zoramthanga in the presence of Union Home Minister Amit Shah and discussed the ways and means to resolve their border issues amicably,” Sarma added.

Renowned economist and writer, Apurba Kumar Dey is hopeful that the decades-old insurgency problem would get a big headway in the New Year as at least three major militant outfits — United Liberation Front of Asom-Independent (ULFA-I), Kamtapur Liberation Organisation (KLO) and Dimasa National Liberation Army (DNLA) are in a peace mode.

While a large number of KLO and DNLA cadres have surrendered to the government after declaring the ceasefire, the outlawed outfit ULFA-I had announced a unilateral ceasefire for three months on May 15 immediately after the new BJP-led government headed by Assam Chief Minister had assumed charge on May 10.

The ULFA-I headed by self-styled Commander-in-Chief Paresh Barua extended their ceasefire for three times since May 15. Himanta Biswa Sarma, who repeatedly urged the militant outfits of the Northeast region to talk with the government about their issues, if any, said that he has been given full responsibility (by Union Home Minister Amit Shah) to start the preliminary talks with the ULFA-I. A back channel talks between the Assam government and ULFA-I are on, the Assam Chief Minister added.

More than a thousand militants belonging to different outfits in Bodoland Territorial Region (BTR) and the three hill districts — Dima Hasao, Karbi Anglong and West Karbi Anglong — surrendered to the government with their arms.

Assam has taken a massive crusade against the illegal drug menace. Former senior police officer and security expert, Pranab Saikia said that drugs and arms worth crores of rupees are smuggled from Myanmar through the Mizoram and Manipur borders ferried through Assam.

“The Assam government in association with the central and state security forces has taken concerted and coordinated efforts to prevent the illegal transportation and trade of drugs. If the drugs smuggling from Myanmar and their transit route through Assam can be stopped, then the drug menace in the Northeastern region would be tamed to a large extent,” Pranab Saikia told IANS.

The Assam Police earlier in December held a meeting in Guwahati with top officials of the Narcotics Control Bureau and security officials of the Northeastern states as well as senior officials of Central Paramilitary forces to finalise the ways and means to curb the illegal drug trade.

The Assam Chief Minister said that the drugs smuggled into Bharat originate from Pakistan, and from across the borders along the Northeastern states from Myanmar. To make the people aware about the drug menace, seized drugs worth Rs 170 crore were burnt publicly in Karbi Anglong, Golaghat, Hojai and Nagaon districts of Assam recently.

The Assam Police have so far seized drugs worth nearly Rs 250 crore in separate incidents since May and arrested nearly 2,100 drug peddlers.